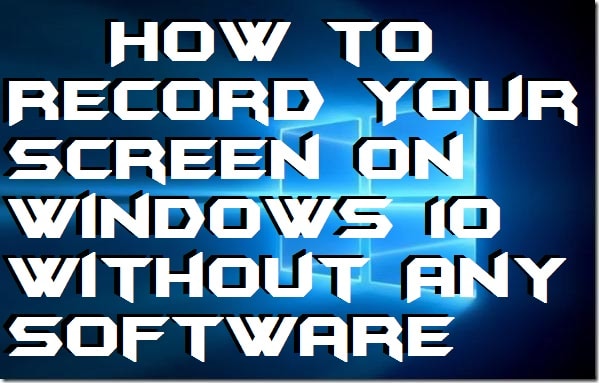 Read more: How to Show Hidden Files in Windows 10 Without Software

Record Your Screen on Windows 10 PC/Laptop

It is very common that most of the people don’t know about the Windows 10 hidden feature to record the screen without any software. Well, yes Windows 10 has a fantastic secret feature which allows Windows 10 users to record the screen of your PC/Laptops whether it’s a gameplay video or a tutorial video. Moreover, this inbuilt feature is offered by the Xbox app which is pre-installed on every Windows 10 versions PC/Laptop. However, this video recording feature which comes inbuilt in Windows 10 PC does not offer many options as other thirst party software offers. But, if you do not want to install such types of software, then you must use this inbuilt feature of Windows 10 PC/Laptop.

How to Record Your Screen on Windows 10 Without Any Software

The method which we are going to use is very simple and straightforward. However, we have discussed earlier that we are not going to use any third party software to do so. Instead of that, we will be using an inbuilt and hidden feature of Windows 10 that will let us record the screen without any trouble. Also, it is a free and quick software which is pre-installed in Windows 10 PC/Laptops. So, scroll down and learn that how to record your screen on windows 10.

Read more: How to Reset Windows 10 on PC/Laptop Without any Software or CD

Last words How to Record Your Screen on Windows 10

So, we have just now learned that how to record your screen on windows 10. In this manner, you can record your screen in Windows 10 PC/Laptops. It is the best and most comfortable as well as a quick way to record the display of an app or page using the hidden feature of Windows 10 operating system. However, lots of software are also available to do the same task. But, this is an easy and quick way because you don’t have to waste your time in installing any extra software. Share this article with your friends and tell your friends that how to record your screen on windows 10.