Hello friends, Today I will share a method on how to disable Siri on iPhone or iPad. Users can even stop Siri on their MacOS. I have shared different method for iOS 10 or earlier versions and iOS 11 or later. You can completely block Siri from your Smartphone. 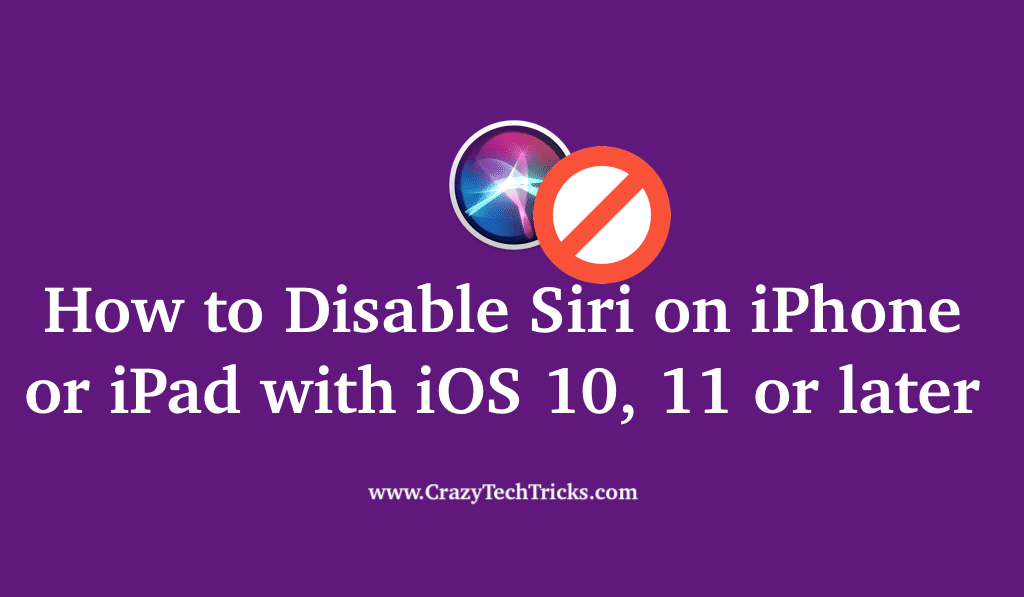 Siri is an intelligent, virtual assistant offered by Apple Inc. to give voice commands in order to operate the iOS, iPadOS, WatchOS, MacOS, and its apps.

Read more: How to Connect AirPods to Android

The latest updates in iOS have widened the third-party API in Siri that includes note-taking apps, task management apps, QR codes, and even online banking. There’s more to Siri in iOS 11 than a few more apps or a speaker. The new, more realistic voices for Siri come with extra intelligence too.

But as stated above, sometimes Siri is annoying too. So, you can follow the easy steps stated below to disable Siri on iPhone or your other devices with iOS 11 or later.

Note: The pop-up menu to disable Siri on iPhone or other devices only be shown; if All the three options are toggled off.

Read more: How to Fix iPhone Stuck in Headphone Mode

Siri in iOS 10 had new powers as compared to the past versions. Instead of being limited to Apple’s own apps, Siri was available to third-party app developers too, which meant that you could perform other tasks such as booking a taxi or sending a voice message too could be done using Siri of iOS 10.

How to Disable Siri on MacOS

Just like other iOS devices, macOS too facilitate its users to use Siri for performing multiple tasks. Siri is available in devices with macOS Sierra or with later updates. You can even disable Siri on your MacOS quite easily by following the steps given below:

This will turn off Siri and will also remove its icon from the Apple Menu bar.

Read more: How to Take a Screenshot on a Mac

How to Turn off Siri Suggestions Widget

Read more: How to Put Mac on Do Not Disturb

Alternatives to Disable Siri on iPhone or iPad

There might be specific reasons when you don’t want to disable Siri completely. So here are some alternatives for you that might be useful when you’re thinking to disable Siri on iPhone or other devices of yours.

1. Turn Siri off on your Lock Screen.

You can turn off Siri on your lock screen using two ways:

If you don’t like the “Hey, Siri” command, you can easily disable that setting too. Go to Settings > Siri & Search and toggle off Listen for Hey Siri.

3. Turn off Location Services for suggestions

Many people like the functionality of Siri but many find it annoying too. This article helped you with the knowledge to disable Siri on iPhone or iPad or your macOS. Also, you got to know about certain alternatives that might help you in place of completely turning off Siri. You can even reactivate it, in the case you start missing Siri.