Complete detail about what is a Pixel in a Smartphone. I will share the difference between Pixel and Megapixel and how pixel affect the quality of the image. I will also share what Pixel is suitable for Android, iPhone, and how their camera is different from DSLR. 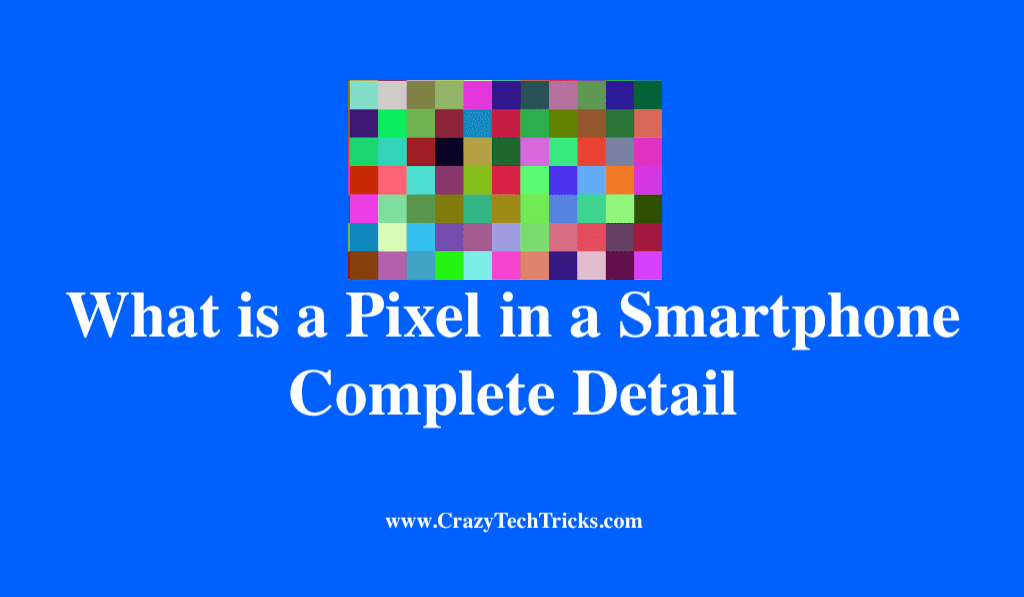 A pixel in a smartphone is basically the tiny unit of an image on which the visual clarity of the image depends. Further, it is one of the most highlighted features of smartphones as today a customer, when wish to buy a smartphone, he certainly searches for how many pixels does the camera of that smartphone holds.

What is a Pixel in a Smartphone?

Have you ever thought about why the pixels in a smartphone are of much importance? Well, because the more concentration of pixels or megapixels you get in your smartphone camera, the more clear picture you can click with your mobile phone.

Read more: How to Fix Camera Failed on Samsung Galaxy

It is also the fact that you can click the more clear image with the rear camera of your phone rather than the selfie camera. The reason behind this may be, while taking a selfie, you hold the camera close to you that lessens the pixels or megapixel count of pictures clicked.

How a Pixel is different from a Megapixel?

Every digital picture or image is made up of numerous meaning dots that combined together to present an image with clarity and details. These mini dots individually are known as pixels or a pixel in a smartphone.

Further, you can say when millions of pixels unite together to form an image then these millions of pixels are known as megapixels. Pixels usually take birth when the rays of light walkthrough the camera lens and get captured into a device called an image sensor that is located inside the camera.

This image sensor holds many light-capturing cavities or wells that are known as photosites. The photosites are placed in specific locations inside the camera. Next, the exciting thing about these photosites is that they are found inside the camera in an arrangement of rows and columns just like a spreadsheet.

Read more: How Many Megapixels is Good for a Camera on Android or iPhone

After the light is captured, the report about the qualities of the captured light in this photo site is then prepared and send to the camera memory. At last, the information being gathered is then processed, and a final image is generated with the appearance of regular distinct tones and colors which are actually the pixels of the image.

As a result, if these pixels are present in millions of numbers in the image, then these are not merely pixels instead these are the megapixels.

How the Count of Pixel effective Image Quality?

One thing that must be focused here that a DSLR camera has the capacity to catch 8-20 times more megapixels than a smartphone camera captures in a single photo. As DSLR camera covers more area than a smartphone rear camera. Therefore, large the area higher the concentration of pixels or megapixels and higher the concentration of pixels more the picture is in detail and clarity.

How Much Megapixels is enough for a Smartphone?

In the era of competitiveness, where every day a new phone is launched by focusing on increased phone camera megapixels. We can take the example of a recently launched XIAOMI smartphone that promises to render 108 MP camera service with an assurance of making your photographs more crystalline and detailing.

But, the question arises here that does this 108-megapixel camera can perform better than a simple DSLR professional camera of sony with just 24 MP. The answer here would be No.

Read more: How to use your iPhone as a Webcam for Recording

Because, megapixels alone can’t make the photograph look professional, however, the quality of a picture depends upon the size of the image sensor too. Hence, the image sensor of a smartphone is usually three to four times smaller than a DSLR camera. That’s why a simple DSLR camera captures pretty clear images even with 24-megapixel picture quality.

To be focused, if the sensor is small in size but there are too many megapixels then the size of pixels will decrease automatically to get fit to the camera sensor. This affects the quality of the picture detrimentally and will even possess double storage on your mobile phone. Moreover, when you will try to crop the image, the pixels of the image will burst out.

How Pixel in a smartphone is related to the Phone Resolution?

The exact meaning of a picture resolution is the details, a picture owns. It basically depends upon the togetherness of pixels in an image. Resolution is said to be measured in PPI Pixel Per Inch.

That means higher the number of pixels in a square inch of the picture, highest the picture resolution will be that later produce a better printed picture. Eventually, the ratio of a proportion of pixels to the image size defines the accurate resolution of an image.

Taking everything into account, it can be concluded from above that pixels are the base of a picture and even only pictures can define what would be the quality of a final image. Along with pixel, the camera image sensor of a mobile phone also plays an indispensable role in creating a clear and detailed picture.