Clash Royale has become the most popular game since it had been released in 2016. Because of its blends of genres, it became the most famous and most played game across the world. It has the goodness of card game with some strategy about how you have to create something unique. It offers a unique deck building and card battle system which makes the new players more exciting to play the game. If you are searching for some similar games like Clash Royale, then you are the perfect place. Today, I have shared free and paid both kinds of similar games like Clash Royale. You can also check our list on best farming games for Android. 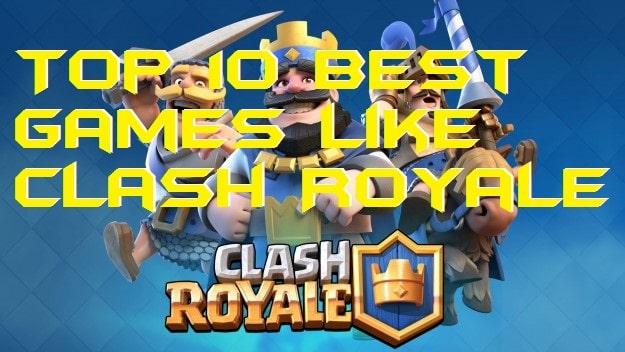 Urban Rivals is a game which has a mixture of collectible card games and role-playing games. Both genres help the player in getting the best experience for casual users. Unlike other card and castle games, Urban Rivals has less technique learning curves and gives full casual features to the players. There is only eight cards are required to compete with other players in the battleground. It gives every player a new or old, an equal chance to compete against each other. Just fight with the toughest player and become a champion in this simplest game.

If we know the most popular cartoon characters Jake and Finn, then you will imagine this gameplay of Card Wars. However, the game may look very simple in the cartoon, but in the real world, it requires a great amount of strategy and thinking. It is the best multiplayer game if you want to become the best card warrior by competing with other players. You have to choose different factions in your side, and you have to work with those factions to play a strategic game.

Order and Chaos Duels is a trending card game where you have to poke your friends or other players to get leaderboard supremacy. This game has over 300 cards which you can collect. Also, Order & Chaos has heroic fantasy art style. It has a great asynchronous online multiplayer mode where you can dive in to play at any time. A player can optimize his or her deck to play in the battle in solo or online multiplayer modes. However, the game has a few learning curves, but besides it, you will also find too much fun while playing it.

Spellbinders is a strategy game that is a good alternative to Clash Royale. Where other games tell you to collect cards to create a powerful deck. Instead of that, Spellbinders directly jump to the battlefields to destroy your opponent’s castle before they destroy yours. You can say that it a kind of game which can be said to Clash Royale without cards. A player can choose a favorite Titans and command an army to clean the favorite spell book. Also, a player can get a grand trophy by playing and ranking itself up in the weekly leagues. It is an amazing and best alternative of Clash royale if you want to eliminate the card collecting system.

The Tower Conquest game aims to collect your army and resources to fight with your enemies. The game has over five factions, 70 unique characters, towers, heroes, and much more. It revolves around the manna pool where you can use summon units to the battleground. You have to be the one who takes down the tower to emerge if you want a winner of the game. It is an amazing alternative to Clash Royale where the idea overall is the same but has super-addictive gameplay. By keeping playing it, you can unlock game levels as well. Also, check these top Android apps to play games.

Cards and Castles is a game which does not require too much brain to put a strategy to win the game. It is developed for casual gamers who only want to play games not to think a lot in strategy. This game also gives you a lighthearted cartoon theme where you can build your castle and fight with your opponent on the battlefield. You can also use your spells and powers to defeat your enemies in the exciting and fast-paced card battles. Get ready to bring your army on the card battleground in this game.

Pocket Fort is a beginner version of Clash Royale game. This game very much pokes the gameplay and techniques of the gaming in the game. But, of course, it has much complexity as compared to Clash Royale game because it does not have much complexity. The game provides you with a pirate theme which let the player experience Clash Royale as well as sea sight. The Pocket Fort has a majority of a good idea in itself and has more sources and material.

Hearthstone is originally known as Hearthstone: Heroes of Warcraft. It is a card-based strategy game where a player has to collect a card to create a powerful deck. A players goal is to form a roster and should take care of the dynamic battlefields. This game features some of the iconic heroes from the world of Warcraft like the Lich King, Illidan, Thrall, and more. A player can also create his or her powerful cards to compete in real time game. Also, if you don’t like to play online, then you can play the single player mission as well. Hearthstone is a best and perfect card-based strategy game that you should try at least once. Do you know? You can also play Xbox 360 games on Laptop.

Deck Heroes is the best alternative of Clash Royale because it is a storyline game similar to Clash Royale. The objective of the player is to try and built a kingdom. Wait for a second because it is not much easy as it sounds. Once you have started building your kingdom, you will be continuously attacked by our opponents and powerful creatures. The graphics and animations of Deck Heroes are very much better as compare to other similar games. You have to play this game truly if you want to unlock more card, opportunities and want extended time.

X-Wars is the best games like Clash Royale which will let you to chose your favorite superheroes such as Ironman, Hulk, and Thor. In this game you have to defeat zombies like X-War: Clash of Zombies does. However, it is not easy as it sounds of course. Because of the vast array of characters, you will find the plenty combats are offered. Every time you play the game you have to use the master technique to win it. Moreover, you can say that its gameplay is kind of similar to Clash Royale game. If you were looking for something different along with the Clash Royale game, then it is the best game for you.