I will share the complete detail on what does the green dot mean on Facebook Profile Picture or Messenger. I have also shared how long will gree dot appear on your Facebook account and who can see it. 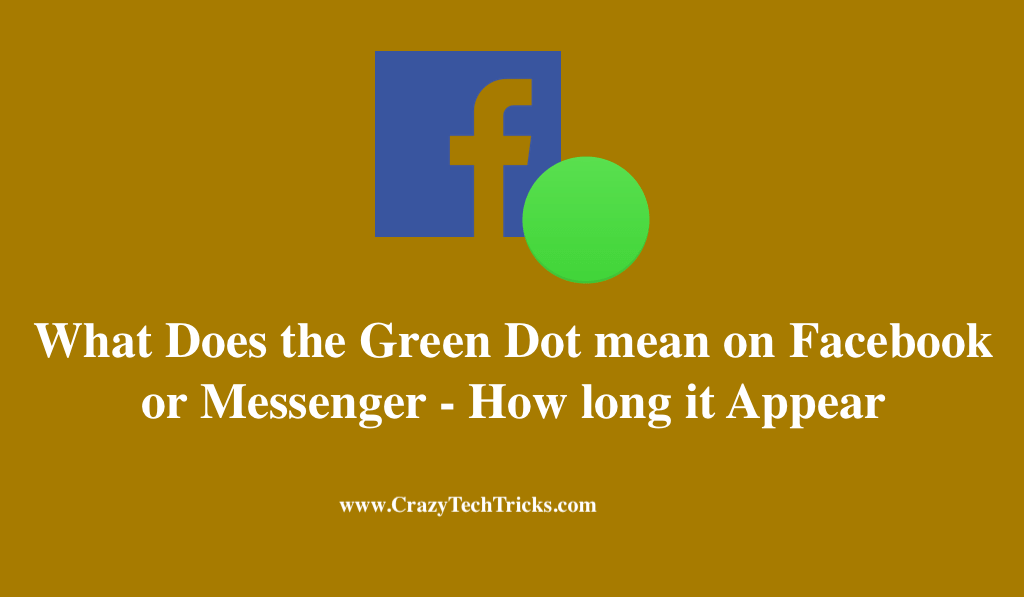 In Facebook Messenger, a green dot or icon next to a person name indicates that the person is online or logged into Facebook. There have been claims, however, that this “green dot” indication appears even when a Facebook user is active. Since some people believe that the green dot will magically appear whenever your mobile data or WiFi is active. However, this is not always the case.

Read more: How to Stop Video Captions on Facebook Online

Furthermore, Facebook can show your activity in Messenger if you receive a notification of a message. Therefore, even if your Facebook application is not open on your device, your profile could still be viewed online.

What Does the Green Dot mean on Facebook Messenger

On Facebook and Messenger, the green dot has the same value, but it does not indicate that a user is simultaneously active on both platforms. If your profile contains a green dot, you are currently logged in to the social media platform. When a green dot appears in your Messenger, it means the user is using the Facebook app, Facebook.com, or Messenger.

Read more: How to Turn Off Active Status on Facebook

Since everyone who regularly uses a social media app knows about this. Although Facebook just split Messenger from Facebook, it is now a standalone app. Messenger is no longer part of Facebook. However, you can still use Messenger through the Facebook app to communicate with friends.

What does the green dot mean on Facebook Profile Picture

As was just said, a green dot will appear on the user’s profile picture whenever they are currently logged into Facebook and is online on messenger. This will serve as a visual clue to other Facebook users that the person is currently engaged in Facebook-related activities. So, if you want to know if someone is online or not, all you have to do is look at their profile picture and see if there is a green dot.

Read more: How to Trace an IP Address from Facebook Profile

How long is the Facebook Chat Green Dot Visible

It will remain green as long as you continue using the app and maintaining an active presence on Facebook. You will see a grey dot appear once you log out of Facebook and make sure you do not have any other apps running in the background on the device.

Can you identify if someone is using Messenger

However, a green dot does not indicate whether or not a user is actively conversing on Messenger, even if it appears next to their profile. Even if the Facebook app isn’t being used, the green dot may still be visible because the program is still running or the user hasn’t logged out of Facebook.

When you are not on Facebook, does Messenger appear active?

This means that they can still send and receive messages, but they will be marked as unavailable. Although they cannot chat if their Messenger app is disabled, they will not appear as Active Now even if they disable the Messenger app.

Read more: How to Mute Someone on Facebook Without Knowing Them

Moreover, Facebook and the Messenger app are not two separate entities. So, the green dot mean on Facebook or Messenger is currently active. Also, Using the settings of Messenger, you can make it so that it does not show your active status.

In some cases, however, such things are unclear, and clarifying them will prevent any confusion on social media. Despite Facebook’s evolution over the years, this feature still needs an upgrade.