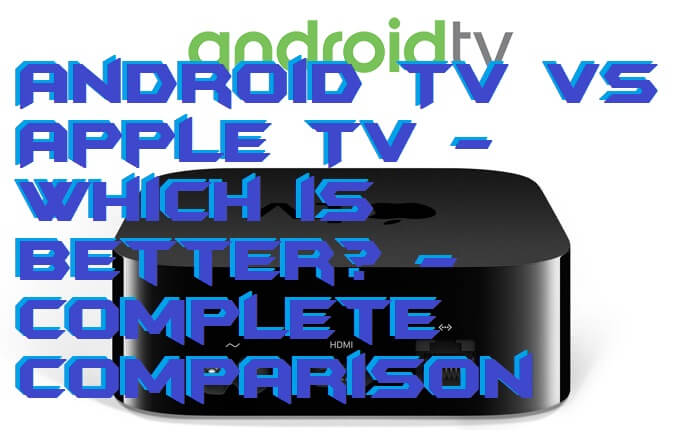 What is Android TV?

Android TV is a smart TV platform which is designed and developed by Google. Android TV runs on the Android operating system. It was first introduced on 25 June 2014. It is available in the dimensions of the graphics that are 1280 × 720, 1920 × 1080, 2560 × 1440, and 3840 × 2160. A user can stream the contents on Android TV via apps which can be free or paid by using the internet connection. Any user can navigate to the menus using his/her phone as a remote guide. The Android TV has very impressive streaming capabilities. However, Android TV will let you use emulators, media player, apps, use Kodi, and connect to your TV tuner also. The downside of the Android TV is that to set up Android TV it requires some technical knowledge. Where overall the Android TV is very much impressive to use.

What is Apple TV?

Apple TV is a digital media player which is sold and developed by Apple Inc. It was released on 9 January 2007. It is a small network appliance and entertainment device which receives digital data from various sources and steam it to the TV. Apple TV is not having any integrated controls. A user can only control it using the Apple TV remote app. One who uses iPhone, iPod Touch, iPad and Apple Watch can easily download the Apple TV remote app to get the Apple TV controls.

The 4K service of Apple TV has been released on 22 September 2017. Apple TV can be very useful if you want to use apps on it. Airplay will let you run the app on your Apple TV directly from the iTunes store. Apple TV user can also play contents from iTunes Store, Netflix, Hulu, SlingTV, PlayStation Vue, Amazon Prime Video, DirecTV, YouTube, etc.

Android TV vs Apple TV – Which is better? – Complete Comparison

Read more: How to Rename your Apple TV

If we talk about the designing quality in the battle of Android TV vs Apple TV. Then, there is no doubt that Apple knows very well that how the thing should be designed. The Apple company has always made the things that become user-friendly. But, when we talk about Android TV, then it is no denying that Android TV is not having a well-designed structure.

However, in the Android TV individual boxed may differ in designing but the internals has remained mostly the same across the board. The interface of Android TV has a card-based design which is very popular with Android Lolipop version (5.0). Where in Apple TV everything is fast, responsive, and appealing to the eye. No doubt that Google has worked hard to make Android TV very much user-friendly in designing and ease of use. But, we all know that Apple has maintained his tradition by making more user-friendly TV as compare to Google.

Read more: How to Get Wireless Display Windows 10 – 100% Working

In the Android TV vs Apple TV debate, the hardware is the necessary thing which we must consider as the important point. If we talk about Apple TV hardware, then we all know that Apple makes it hardware itself and all the hardware of Apple are very eco-friendly. Apple always makes sure that its hardware and components should be a part of the ecosystem. Where on the other side Android TV comes in many different shapes and forms. Apple TV has its own 4K set. Where Android TV has three different streaming boxes that are NVIDIA Shield, Mii Box, and Razer Forge TV. Also,  Also, the remoted of Apple TV and Android TV are also vary widely.

In the matter of Apps and content of the war on Android TV vs Apple TV. Both Android TV and Apple TV offers much content as well as apps on the TV. Apple TV will let you use apps from Apple store as well as iTunes for content. Although, an Apple TV user can use other resources also if he/she wants to watch videos, play games, and much more. If we talk about Android TV then it is well known that an Android TV user an use his/her TV to go on to the Android store.

However, a person can also use Google’s other services along with various options like TV channel, live stream, and much more. Android TV is integrated with the Google services. So that it will be easy for you to use Google services on your Android TV. Where Apple TV can be found useful for you in content by providing some great platforms such as Netflix and HBO Now.

Read more: LCD VS LED Monitor – What is the Difference? Which is Better?

In the battle of Android TV vs Apple TV, both the TVs are the winner. But, there are some points which you must check out before purchasing any one. If you love the design of the TV or need a designer TV then you should go on with the Apple TV. Where, if you want a TV which supports Android features and designing doesn’t matter for you then you must go with the Android TV. However, there is some similar point which you must check out before choosing one of them. Overall, in designing and content matter Apple TV is the winner. Where the Android TV is the winner in the matter of apps, features and compatibility.

Last Words on Android TV vs Apple TV – Which is better? – Complete Comparison