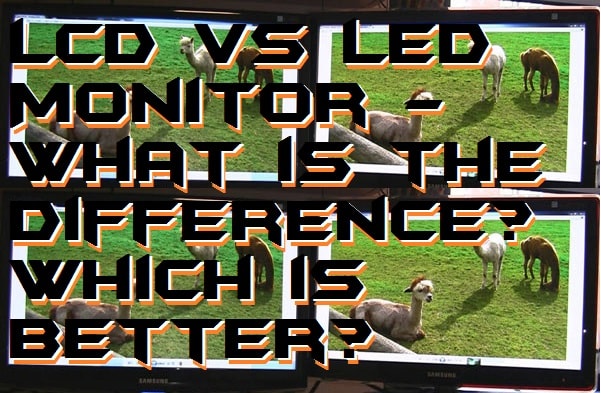 In the battle of the LCD vs LED Monitor, we will see the differences and will see that which monitor screen is best for us. If you are thinking to buy a new monitor than it is common that you are having a little bit of confusion whether to by LCD or LED monitor. You would also like to know that which monitor will be perfect for you and at what price. So, in this article, we will check out some differences and major things to compare LCD and LED Monitor. Hence, I would like to start the battle of LCD vs LED Monitor without taking your more time.

LCD stands for Liquid Crystal Display which is one of the most fundamental and enduring technologies. It is used in most of the monitors, TVs, tablets, smartphones, etc. In LCD, televisions and monitors use CRTs (Cathode Ray Tube) in providing the images on the screen. When the LCD displays the photos, then the bulk CRTs are also displayed. In the manner to provide a color image on to the screen, LCD has RGB (Red, Green, Blue) subpixels in each of the screen pixels. Commonly, an LCD using CCFL (Cold Cathode Fluorescent Lamps) to provide backlight. This CCFL is the source at the back side of the display which helps the crystal in lighting up.

LED stands for Light Emitting Diode which is a small semiconductor to emit lights when the electric current is passed through them. However, the light does not look particularly bright often. Besides it, they are much efficient and long lasting than the standard lights. But, now the LED is mostly used by many of the manufacturers as compared to LCD.  LED is available in three categories that are RGB LED, Full Array, and Edge Lit. In LED, it uses the individual LEDs for each of the pixels to provide backlight. Where LCD uses CCFL tubes to do so.

LCD vs LED Monitor – What is the Difference?

Talking about the backlight comparison in the battle of LCD vs LED Monitor. It is already known that LCD uses CCFL tubes to do so where LED uses LED bulbs to do the same. However, the RGB concept on both the monitor which is LCD and LED is same. Also, the LED monitor can use individual backlight for its pixels on the screen. But, the LCD monitor can’t use a sperate portion of the backlight in the pixels on the screen. Moreover, the LCD monitor consumes much energy than LED monitor because of the heavy backlight system. Hence, the LED is much efficient than LCD monitor.

When we talk about the power consumption, then it is the big thing. In simple words, LCD consumes much power than LED. Because of the CCFL tube, the LCD eats much electricity to display pixels on the screen. Where the LED only uses LED bulbs to do the same. The power which LCD’s monitor backlight need is much more as compared to the LED monitor. However, the RGB system on both the monitors will be same. Also, only the backlight is the main difference in the war of LCD vs LED Monitor. Thus, the LED is the winner as it consumes less power than LCD.

If we talk about the thickness in the battle of LCD vs LED Monitor, then there is only one thing which is essential. LCD uses CCFL tubes to provide the backlight on the screen, and that CCFL tube is very thick so that the monitor cannot be slim. But, in LEDs, there are no CCFL tubes to supply the backlight on the screen. Instead of it, LED monitor consists the LED bulbs for its pixels on the screen. This causes the more thickness in LCD than LED monitors. Thus, the winner is LED because it can be slim but LCD can not.

In the war of LCD vs LED Monitor, the pricing is the best topic to see the battle between LCD and LED. LED is much better than LCD and consumes less power. As well as LED has an individual backlight providing facility which LCD do not have. Thus, these things made LED much costly as compared to LCD monitor. The LCD monitor can be easily available at 120-130 dollars. But, the LED will charge you up to $200 as the minimum price. Once paying a perfect fee to buy the LED monitor, it will give you a worthful experience. So, the LED monitor is the winner in pricing.

LCD vs LED Monitor – Which is Better?

Last Words on LCD vs LED Monitor – What is the Difference? Which is Better?

This was the battle of LCD vs LED Monitor. Using this article, you have seen that which monitor is best and perfect for you. Also, you can use this article to get help in clearing your confusion if you are thinking of buying a television whether its LCD or LED. We have checked out some most useful options and differences between LCD and LED Monitor. Hope you liked this article and this article finds helpful for you. Share this article with your friends also who is going to buy a new monitor and TV as well from the two options that are LED and LCD.